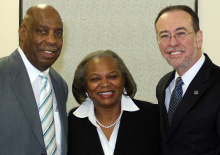 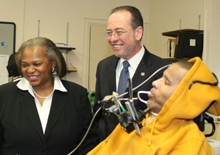 Coler-Goldwater Specialty Hospital and Nursing Facility, a 2,016-bed specialty hospital and rehabilitation care nursing facility of the New York City Health and Hospitals Corporation, today received a donation from Wheelchairs Charities Inc. (WCI) of 65 new Dell computers specially designed with the latest in assistive technology that helps make life easier for people with disabilities. The computers feature voice recognition, zoom-text, and a pointer device to facilitate use by quadriplegic individuals. The donation was presented at a ribbon-cutting ceremony for the Coler-Goldwater computer lab for residents by Hank Carter, Chairman and Founder of WCI, a long-time philanthropic supporter who over the last 40 years has raised $20 million dollars worth of equipment for patients and residents of Coler-Goldwater, including more than 1,000 state-of-the-art computers. Mr. Carter was joined by NBA All-Star Speedy Claxton; recording artist Maino; WBLS radio personalities Marley Marl, Hal Jackson and Debbie Jackson; HHC President Alan D. Aviles; Lynda D. Curtis, HHC Senior Vice President; and Robert Hughes, Coler-Goldwater Executive Director.
“The 65 computers donated today by Wheelchair Charities, under the guiding hand of Hank Carter, will open whole new vistas of communication to even our most severely disabled patients. The technology will enable conversations that might never have taken place, enriching the therapeutic work of our staff and the lives of our patients and their families,” said Lynda Curtis, Senior Vice President of the HHC North Manhattan Network that includes Bellevue and Coler-Goldwater. “The gift continues a forty year tradition of giving by Wheelchair Charities to Coler-Goldwater — over 1,000 computers and millions and millions of dollars to help us sustain our mission. Words cannot fully express our gratitude for this remarkable partnership.”
“For nearly four decades, God’s grace has given me the guidance and inspiration to carry out His mission on behalf of Coler-Goldwater thanks to the generosity of our supporters. With God’s help, nothing is impossible,” said Henry (Hank) Carter.
“We are forever grateful to Hank Carter and Wheelchair Charities for their on-going compassionate support and generous contributions. For close to 40 years, Hank has enabled our patients and residents to reach their fullest potential and live a much improved quality of life. Hank Carter’s selfless nature and humility are powers of example to us all,” said Robert Hughes, Executive Director, Coler-Goldwater.

The history of this charity dates back to the early 70’s when violence filled many areas of New York City.  Hank Carter’s friend was hit by a stray bullet during a shoot-out on a city street and left paralyzed from the chest down.  While visiting his friend at Coler-Goldwater, Carter connected with the special needs of the residents there and organized the first fundraiser in 1973, marking the beginning of Wheelchair Charities Inc.

The giving continued strong, and in 1982  the first computers were purchased for the Coler-Goldwater children’s ward and later for the general patient population. Over the last 40 years, Hank Carter and WCI’s strong supporters have raised $20 million dollars worth of equipment, with $3 million of that going to the purchase of 1,000 state- of- the-art computers for use by the patients and residents in the computer lab. In 2004, the New York Health and Hospitals Corporation voted unanimously to rename the Hospital’s Department of Rehabilitative Medicine the Henry “Hank” Carter Rehabilitation Center—making it the first time a living person had such a distinction.

Coler-Goldwater is 2,016-bed specialty hospital and rehabilitation care nursing facility located on Roosevelt Island. Goldwater Hospital opened in 1939 and was the first public hospital in the United States for chronic diseases.  Coler Hospital opened in 1952 and served a similar population.  Coler and Goldwater merged in 1996. Coler-Goldwater is a leading comprehensive specialty care hospital and nursing facility dedicated to providing quality medical, sub- acute, rehabilitative and traditional nursing home care.  Coler –Goldwater is committed to serving New York City and the surrounding communities, while setting an example as a national leader in long- term and sub- acute care with centers of excellence in areas as: geriatrics, rehabilitation and ventilator dependence.  Coler-Goldwater is the proud recipient of the 2006 Hobart Jackson Award for Cultural Diversity. For more information visit www.nychhc.org/coler.