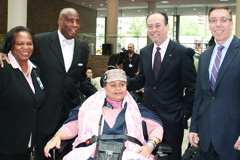 Coler-Goldwater Specialty Hospital and Nursing Facility, a 2,016-bed specialty hospital and rehabilitation care nursing facility of the New York City Health and Hospitals Corporation (HHC), today received and distributed twelve (12) state-of the art, customized wheelchairs to patients with complex disabilities. The motorized chairs were donated by Wheelchair Charities, Inc. (WCI), a philanthropy founded by Henry ‘Hank’ Carter.
The donation was presented at a ceremony at Bellevue Hospital, the hub of HHC’s South Manhattan Healthcare Network which includes Coler-Goldwater. Each wheelchair has features that address the specific needs of the recipients. For example, new power wheelchairs will help several patients who suffer from low endurance, enjoy greater mobility and independence with less effort. Improved mobility will make it possible for these patients to participate more fully in recreational and social activities both inside and outside the hospital.
One patient, the victim of an automobile accident, will be able to visit her sick daughter. Another patient with multiple disabling conditions, including a curved spine, was given a wheelchair with a chin control and a special molded seating system that will enable him to sit upright. One chair is outfitted with special leg rests to accommodate knee extension contractures and with an air-bud system to relieve pressure and prevent skin ulcers in the lower back.
Hank Carter, Chairman and Founder of WCI, is a long-time philanthropic supporter of Coler-Goldwater. He has raised $20 million worth of equipment for patients and residents there over close to 40 years, including thousands of mechanical and electrical state-of-the-art wheelchairs.
“Hank Carter and Wheelchair Charities provide the constant and heartfelt generosity that empowers HHC patients who have complex mobility issues and enables them to reach new levels of independence. He is, quite simply, an extraordinary and precious friend to HHC and our patients,” said Alan D. Aviles, HHC President.
Mr. Carter was joined by Aviles; Lynda D. Curtis, HHC Senior Vice President and Bellevue Executive Director; Robert K. Hughes, Coler-Goldwater Executive Director; and Floyd Long, Coler-Goldwater Deputy Executive Director. The Rev. John Boyd, Jr., delivered an opening prayer and the event’s emcee was WBLS radio host Debbie Jackson.
“With this donation, Wheelchair Charities has once again made it possible for our disabled public hospital patients to experience a vast improvement in their quality of life through access to leading edge technology. For each patient who receives a wheelchair today, the term ‘mobility’ will acquire a new meaning in terms of ease of use, comfort, and speed,” said Lynda D. Curtis, Senior Vice President of the HHC South Manhattan Healthcare Network.
“In everything, put God first and everything will fall in place,” said Hank Carter.
“There is simply no way to adequately thank Wheelchair Charities and its visionary founder, Hank Carter. We refer to him as a ‘living treasure,’ but even that term doesn’t capture the dynamic and supremely altruistic spirit of Hank Carter,” said Robert K. Hughes, Executive Director, Coler-Goldwater. “He has devoted so much energy and effort on behalf of our disabled patients who have some of the most complex needs of any patient in New York City.”

The history of this charity dates back to the early 70’s when violence filled many areas of New York City. Hank Carter’s friend was hit by a stray bullet during a shoot-out on a city street and left paralyzed from the chest down. While visiting his friend at Coler-Goldwater, Carter connected with the special needs of the residents there and organized the first fundraiser in 1973, marking the beginning of Wheelchair Charities, Inc (WCI). The giving continued strong, and in 1982 the first computers were purchased for the Coler-Goldwater children’s ward and, later, for the general patient population. Over the last 40 years, Hank Carter and WCI’s strong supporters have raised $20 million worth of equipment, with $3 million of that going to the purchase of over 1,000 state-of-the-art computers for use by the patients and residents in the computer lab. In 2004, the New York Health and Hospitals Corporation voted unanimously to rename the Hospital’s Department of Rehabilitative Medicine the Henry ‘Hank’ Carter Rehabilitation Center—making it the first time a living person had such a distinction.

Coler-Goldwater is a 2,016-bed specialty hospital and rehabilitation care nursing facility located on Roosevelt Island. Goldwater Hospital opened in 1939 and was the first public hospital in the United States for chronic diseases. Coler Hospital opened in 1952 and served a similar population. Coler and Goldwater merged in 1996. Coler-Goldwater is a leading comprehensive specialty care hospital and nursing facility dedicated to providing quality medical, sub- acute, rehabilitative and traditional nursing home care. Coler–Goldwater is committed to serving New York City and the surrounding communities, while setting an example as a national leader in long- term and sub- acute care with centers of excellence in areas such as: geriatrics, rehabilitation and ventilator dependence. Coler-Goldwater is the proud recipient of the 2006 Hobart Jackson Award for Cultural Diversity. For more information visit www.nychhc.org/coler.