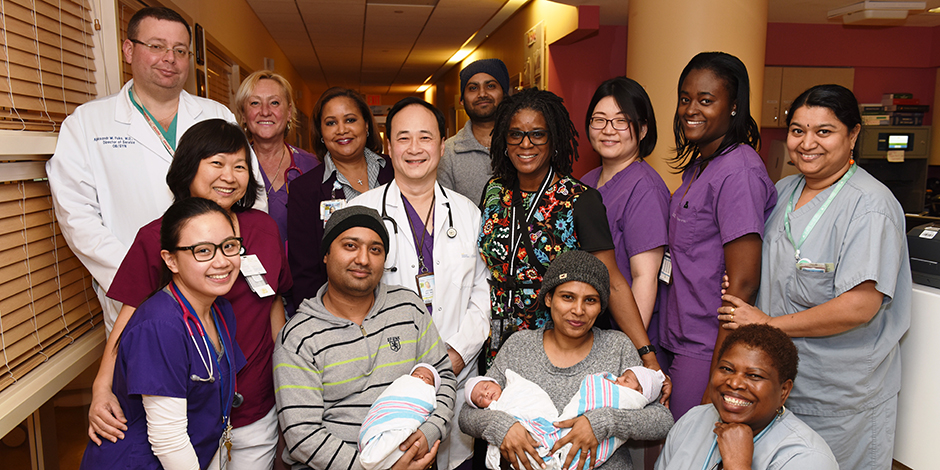 A trio of baby girls was born at NYC Health + Hospitals/Queens on the evening of Monday, January 15, to the delight of their mother, Navdeep Kaur, and father, Manjinder Singh.

Ms. Kaur had been scheduled for a Caesarian delivery for her triplets on Tuesday, January 16. All the necessary preparations between the hospital’s OB and Neonatology teams were made for the triplets to be delivered at 34 weeks, which is considered full term for triplets. Arrangements were in place for additional staff and specialized equipment. But the babies had their own plans. Ms. Kaur presented to the Labor & Delivery team at NYC Health + Hospitals/Queens the evening prior, at which point it was determined an emergency C-section had to be performed. The first girl, Anayapreet Kaur, was born at 9:26 p.m., weighing 3 pounds, 11 ounces. The second, Hargunpreet Kaur followed at 9:27 p.m., weighing 3 pounds, 6 ounces. And last but not least—in fact, weighing the most, at 4 pounds—was Parulpreet Kaur, born at 9:28 p.m. While all three initially had mild respiratory distress, they are now doing fine breathing room air. All required neonatal care. Parulpreet was discharged on January 31, and Anayapreet and Hargunpreet were discharged on February 8. The family is now all happy and at home in Valley Stream.

“NYC Health + Hospitals/Queens is proud to be a community hospital where young families can count on having a healthy start in life,” said hospital CEO Chris Roker. “Our birthing center provides a warm and vibrant atmosphere where new moms can look forward to a promising experience for themselves and their babies under the expert guidance of our Labor & Delivery team of professionals.”

In 2014, NYC Health + Hospitals/Queens was the first hospital in the borough to receive the World Health Organization’s designation as a “Baby-Friendly” hospital—the result of an intensive three-year collaborative process to support new mothers in breastfeeding newborns.

Ms. Kaur, who received her prenatal care at NYC Health + Hospitals/Queens, expressed gratitude to the entire medical team for all the care she received before, during, and after delivery, as well as for the care her daughters received in the NICU.

“Over the past several years, our medical team has delivered multiple sets of triplets, so we are well-versed in how to achieve the best possible outcomes when faced with challenging circumstances,” said Aleksandr Fuks, MD, Director of Obstetrics & Gynecology at NYC Health + Hospitals/Queens.

The Kaur girls are the second set of triplets born at NYC Health + Hospitals/Queens within the past year.

A member of NYC Health + Hospitals, NYC Health + Hospitals/Queens is a major healthcare provider in the borough of Queens. Its foremost mission is to provide quality, comprehensive care to all members of the public regardless of their ability to pay. In 2015 NYC Health + Hospitals/Queens marked its 80th anniversary of serving the communities of central and southeastern Queens, having first opened its doors as Queens General Hospital in 1935. Newly modernized – the result of a four-year, $149 million capital project – the hospital officially reopened its doors to the community in January 2002 with a sprawling state-of-the-art facility. Encompassing 360,000 square feet, it is now comprised of 301 licensed beds, spacious ambulatory care suites featuring both primary and specialty services, and cutting-edge equipment. It also houses four Centers of Excellence in Cancer Care, Diabetes Management, Women’s Health and Behavioral Health. To learn more about NYC Health + Hospitals/Queens, visit /queens.