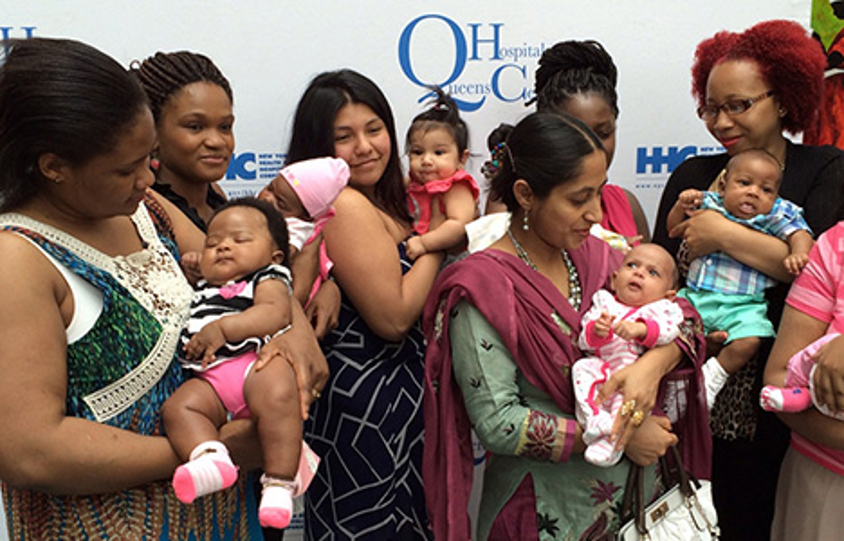 New York City Health and Hospitals Corporation (HHC) officials today announced that Queens Hospital Center has been named a “Baby-Friendly” hospital by the World Health Organization (WHO) and the United Nations Children’s Fund (UNICEF). Queens Hospital Center becomes the first hospital in Queens and just the third in New York City to achieve the designation, including HHC’s Harlem Hospital Center in Manhattan.
In an effort to promote child health in Queens, QHC this fall will launch “Journey to a Baby-Friendly Queens,” a major education and awareness campaign designed to improve the health outcomes of children by increasing the number of breastfeeding mothers throughout the borough. Hospital staff will conduct a series of workshops throughout Queens to provide mothers and newborns with access to education and counseling on the benefits of breastfeeding, including medical evidence that shows babies who are not breastfed are at higher risk for immediate and lifelong health issues. To further extend the reach of these educational efforts, QHC will partner with community organizations to distribute materials and work with their members to transform Queens businesses, places of worship and community centers into places that are supportive of breastfeeding.
“This accomplishment by Queens Hospital Center is another example of how City public hospitals are continually striving for excellence and are committed to their patients,” said Antonio Martin, HHC Executive Vice President and Corporate Chief Operating Officer. “By taking steps to ensure child health at the first stages of life we reduce the number of health complications and conditions that require management in future years.”
Approximately 1,800 infants are born at QHC annually, and 80 percent of women who give birth at QHC participate in all elements of prenatal breastfeeding education and counseling, including classes on the benefits of breastfeeding, exclusivity of breastfeeding, duration of feeding, the importance of skin-to-skin contact with their infant, and rooming-in together with their baby at the hospital. The percentage of mothers who exclusively fed their babies with breast milk at QHC increased from 12 percent in 2012 to 55 percent in 2014; the volume of baby formula used in the hospital’s post-partum unit decreased by over two-thirds from 2011 to 2014; and in 2014, 96 percent of babies received breast milk while in QHC’s Neonatal Intensive Care Unit (NICU).
“Queens Hospital Center is now at the forefront of a borough-wide movement recognizing breastfeeding as the best and healthiest start for mothers and babies,” said Chris Constantino, Senior Vice President of HHC’S Queens Health Network. “There is a significant body of medical evidence confirming the immediate and lifelong health benefits of breastfeeding for the baby, the mother, and the community. In the coming months it will be our network’s mission to change the culture in Queens with respect to breastfeeding and do all we can to make it a ‘Baby-Friendly’ borough.” 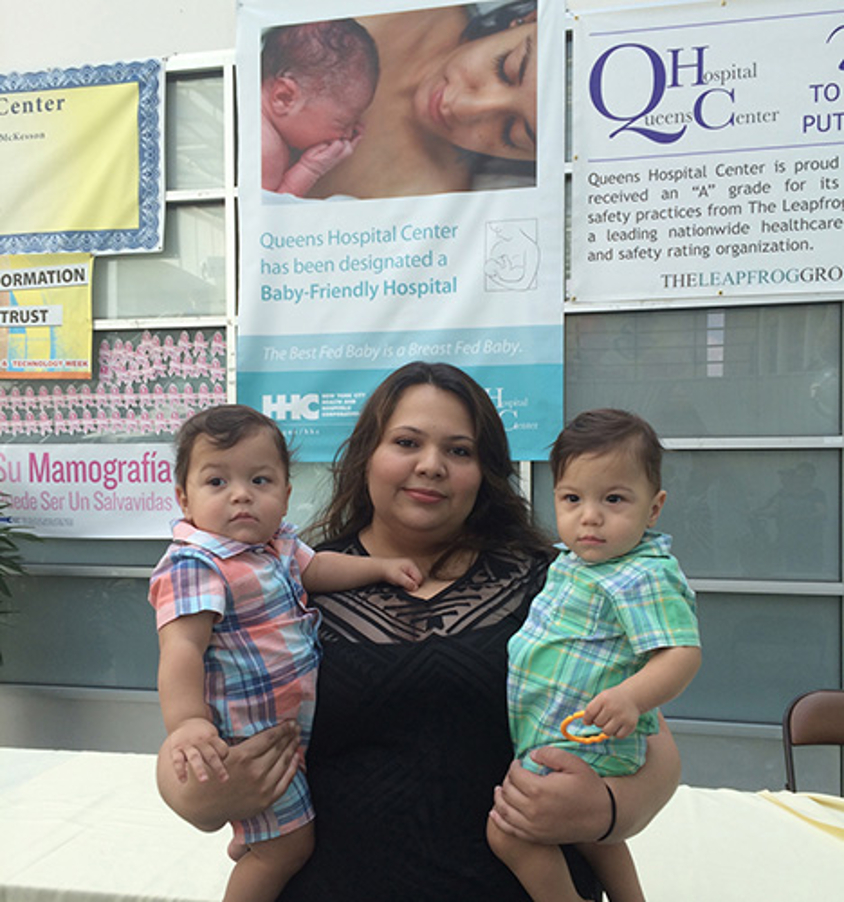 Hospitals with the “Baby-Friendly” designation are recognized for maternity facilities offering the highest levels of breastfeeding education and support, and for having environments that foster and encourage maternal-infant bonding. QHC underwent a rigorous two-day survey by an assessment team from Baby-Friendly USA where it demonstrated successful implementation of the “Ten Steps to Successful Breastfeeding,” which represent evidence-based practices that have been shown to increase breastfeeding initiation and duration. “We congratulate Queens Hospital Center on becoming the first hospital in the borough to achieve this important designation,” said Health Commissioner Dr. Mary Bassett. “Queens Hospital Center’s efforts to increase breastfeeding rates and support maternal-infant bonding, rooming-in and other family centered care practices that are integral to the Baby-Friendly Hospital Initiative will help ensure both health and happiness for the mothers, babies and families they serve.”
QHC began a seven-year multidisciplinary process to move toward full compliance to become a “Baby-Friendly” hospital with the help of two grants from the NYC Department of Health and Mental Hygiene. Strategies for success included achieving consistency with keeping moms and babies together, skin-to-skin, immediately after birth, in order to allow a successful first latch; bringing mom and babies over together, skin-to-skin from the Labor & Delivery unit to QHC’s Post-Partum area; and closing its transitional nursery to maintain 24-hour “rooming in” between baby and mother.
“I chose to have my baby at Queens Hospital Center after visiting my cousin who also gave birth at the hospital,” said Vanessa Belfor, a mother who received prenatal care at Queens Hospital Center. “I was very impressed with the excellent care they provided, especially the information I received about breastfeeding. When my baby was born prematurely I definitely understood that breastfeeding wasn’t just an option, but it was a responsibility.”
“We are thrilled to have received the Baby-Friendly designation, as it is something our Center of Excellence in Women and Children Services and our Department of Pediatrics have worked collaboratively toward for several years to accomplish,” said Julius Wool, Executive Director of Queens Hospital Center. “The extensive certification process is a validation of QHC’s efforts for enhancing the role of maternity services to enable mothers to breastfeed their babies to promote the best start in life. We believe it is our obligation to share this wisdom with the community.”
“We are extremely proud that Queens Hospital Center has achieved Baby-Friendly Designation,” said Dr. Jasmin Moshirpur, Queens Health Network Dean/Medical Director. “This achievement demonstrates the ongoing commitment to excellence in patient care by both the departments of Obstetrics-Gynecology and Pediatrics.”
“Along this seven-year journey, we have all learned a tremendous amount about how to achieve a successful breastfeeding environment from the literature, other experts, from our patients and from each other,” said Dr. Marcy Stein Albert, QHC’s Director of Pediatrics. “We were able to remove many artificial barriers to this very natural activity and began to see real results. We are extraordinarily proud of the work that was done to achieve our goals and are gratified to know we are all working toward giving our babies the best possible start – with the potential of having a lifelong positive health impact.”
“We have seen tangible results during the course of Queens Hospital Center’s Baby-Friendly journey which began seven years ago,” said Joan Gabriele, Deputy Executive Director for Patient Care Services. “At the start of the project, fewer than five percent of our maternity patients exclusively breastfed during their hospital stay. There are now more than 50 percent of our maternity patients who are breastfeeding exclusively. The medical evidence points to the considerable benefits of breastfeeding, and we are committed to informing the community of its positive impact on health for both mothers and babies.”
“Here at Queens, we specialize in the management of low- and high-risk pregnancies,” said Dr. Aleksandr Fuks, Director of Queens Hospital Center’s Department of OB-GYN. “The focus of our care has always been patient-centered and responsive to the unique needs of each family. Baby-Friendly designation once again emphasizes our goal: a healthy mom, baby and family.”
“The Queens Breastfeeding Alliance works in conjunction with the New York City Breastfeeding Leadership Council,” said Lee Volaski, member of the Queens Breastfeeding Alliance and QHC certified lactation counselor. “Since 2005, individuals, community organizations, lactation professionals and peer counselors have been working together to increase awareness around breastfeeding issues and provide breastfeeding education to the community.”
“The Baby-Friendly designation process is extremely rigorous,” said Trish MacEnroe, Executive Director of Baby-Friendly USA. “Queens Hospital did an outstanding job of transforming their maternity care practices to reflect the most current scientific evidence. We commend them for this tremendous accomplishment.”
Baby-Friendly USA’s “Ten Steps to Successful Breastfeeding” are:

A member of the New York City Health and Hospitals Corporation and the Queens Health Network, Queens Hospital Center is a major healthcare provider in the borough of Queens. Its foremost mission is to provide quality, comprehensive care to all members of the public regardless of their ability to pay. The year 2010 marked its 75th anniversary of serving the communities of central and southeastern Queens, having first opened its doors as Queens General Hospital in 1935. Newly modernized – the result of a four-year, $149 million capital project – the hospital officially reopened its doors to the community in January 2002 with a sprawling state-of-the-art facility. Encompassing 360,000 square feet, it is now comprised of 301 licensed beds, spacious ambulatory care suites featuring both primary and specialty services, and cutting-edge equipment. It also houses four Centers of Excellence in Cancer Care, Diabetes Management, Women’s Health and Behavioral Health. To learn more about Queens Hospital Center, visit www.nychhc.org/hhc.