Testing for All: Over One Million Tests Performed by City-Run Testing Sites in Response to Omicron Surge

City-run testing sites, which more than doubled to over 250 sites over the last month, have recently accounted for a quarter of citywide tests performed per day 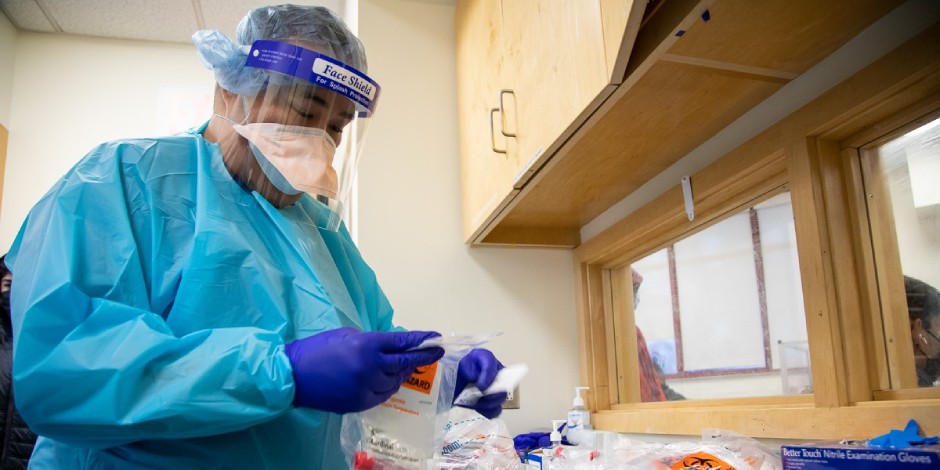 The NYC Test & Trace Corps announced today that, since the omicron surge began in early December 2021, the now over 250 City-run testing sites have performed nearly 1.5 million COVID-19 diagnostic tests. Since late December, City-run testing sites have accounted for a quarter of all tests performed in New York City per day and saw a 79% increase in testing from the month prior.
“Our City’s public health system and Test & Trace Corps have proven to be nimble and flexible throughout this pandemic, adjusting to the ever-changing needs and challenges,” said NYC Health + Hospitals President and CEO Mitchell Katz, MD. “Doubling the number of testing sites and conducting nearly one and half million COVID tests in a matter of weeks speaks volumes to our City’s ability to respond to this virus.”
“Testing remains a critical component in the fight against COVID-19, and we will keep working to ensure that New Yorkers have access to the resources they need,” said New York City Health Commissioner Dr. Dave A. Chokshi. “Thank you to all New Yorkers who have gotten tested during this latest surge — your diligence helps protect you and those around you.”
“Working with our communities and doubling the number of City-run testing sites has allowed us to conduct over one million tests since the omicron surge, which has given New Yorkers one million opportunities to fight back against this wave and protect the most vulnerable among us,” said Senior Vice President of Ambulatory Care and Population Health at New York City Health + Hospitals and NYC Test & Trace Corps Executive Director Dr. Ted Long. “The faster we can detect positive cases, the faster we can connect people to the critical resources they need to isolate and break chains of transmission. We cannot let our guard down, and these hundreds of new testing sites give us the tools to get our city through this wave as safely as possible.”
In early December, prior to the omicron surge, City-run testing locations — which include NYC Test & Trace fixed, mobile and self-test sites, NYC Health + Hospitals hospital facilities, Gotham Health centers and NYC Health Dept. COVID-19 Express Care sites — had performed 7.9 million COVID-19 diagnostic tests. There were over 900,000 tests performed by City-run sites in December alone — a 79% increase from the month prior. To date, City-run testing sites have performed over 9 million tests, including over 1.4 million tests since the surge began.
During the first week of January 2022, City-run testing sites performed nearly 370,000 tests, approximately 31% of all tests performed in the city that week. City-run testing reached a peak of nearly 67,000 tests performed on January 3, and averaged over 50,000 tests per day during the first weeks of 2022. In December 2021, City-run testing sites detected at least 133,000 positive tests.
There are currently more than 160 City-run mobile testing sites operating in all five boroughs, over 60 of which have opened in the last three weeks. Before the omicron surge, the City’s mobile testing fleet performed an average of approximately 5,300 tests per day. During the last week of December, the City’s mobile testing averaged over 12,000 tests performed a day, and eclipsed 23,000 tests on January 2. Since the beginning of the omicron surge, City-run testing sites have deployed to over 500 locations.
There are currently over 100 City-run fixed test site locations operating in all five boroughs, over 40 of which have opened in the last three weeks. Fixed test sites include over 75 testing sites operated by NYC Test & Trace, 18 testing facilities operated by New York City Health + Hospitals and Gotham Health and eight COVID-19 Express Care testing sites operated by the NYC Health Dept.
“Our operations staff and testing personnel worked through the challenge omicron posed, rising to the occasion to open over 150 new testing sites and provide testing to more than one million New Yorkers since the surge began,” said Chris Keeley, Chief Operating Officer of the NYC Test & Trace Corps and Assistant Vice President in the Office of Ambulatory Care at NYC Health + Hospitals. “The omicron variant required our testing teams to mobilize a response with unprecedented speed and scope — and that’s exactly what we delivered. We are committed to doing everything we can to make testing fast and accessible for all New Yorkers. I’d especially like to thank our frontline healthcare heroes who worked long hours at these testing sites to provide 1.5 million tests for their fellow New Yorkers in their time of need.”
NYC Test & Trace has deployed mobile testing teams to 37 New York City hospitals to provide critical relief for emergency departments during the omicron surge. Over 230 cumulative days of testing, these teams have provided nearly 20,000 tests at 28 private hospitals and nine New York City Health + Hospitals locations.
In addition, since December 28, NYC Test & Trace has distributed more than 4 million at-home rapid tests to schools across New York City to support the City’s “Stay Safe and Stay Open” plan. Since schools reopened on January 3, NYC Test & Trace has doubled the amount of in-school surveillance testing conducted on a daily basis. Test & Trace is currently operating five fixed testing sites exclusively for Department of Education staff as well as 28 sites where staff have priority access to make testing for educators and other school employees as easy as possible.
At-home testing for COVID-19 is available to all immunocompromised New Yorkers and those ages 65 and older. Appointments for at-home testing are available seven days a week, from 9 a.m. to 7 p.m. New Yorkers may schedule an appointment by calling 929-298-9400.
Please visit NYC.gov/covidtest for a complete, up to date list of City-run testing sites to find a location that is most convenient and accessible for you.

The NYC Test & Trace Corps is the City’s comprehensive effort to test, trace, and provide support for every case of COVID-19 and every person exposed to the virus that causes COVID-19. Through a partnership with NYC Health + Hospitals and the Department of Health and Mental Hygiene, the Test & Trace Corps allows the City to immediately isolate and care for those who test positive for the virus and then rapidly track, assess, and quarantine anyone who may have been exposed. To help all New Yorkers safely separate at home and monitor their health status, the Take Care pillar of the Test & Trace Corps also offers free hotel rooms with wraparound services for New Yorkers who are unable to safely separate in their own homes.