Close to 1,500 Infections Prevented, Many Lives Saved and Millions in Healthcare Costs Averted 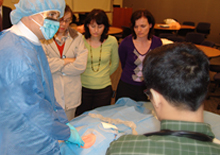 The New York City Health and Hospitals Corporation (HHC) today announced that infection rates in the 27 intensive care units in its 11 public hospitals continue to fall and have dropped dramatically in the last five years. The rate of ventilator-associated pneumonia (VAP) dropped by almost 90 percent and the rate of central line bloodstream infection dropped by nearly 60 percent since 2005 when HHC launched a patient safety program to reduce preventable deaths and unnecessary hospital stays.
As a leader in healthcare transparency, the new 2009 rates are available to the public on the HHC website, www.nychhc.org/infocus, and are part of a wide range of quality and safety performance measures posted online.
“Our progress in reducing hospital-acquired infections is being sustained through increased vigilance, strict adherence to best clinical practices, the adoption of proven, lifesaving interventions, and a relentless focus on optimal hand hygiene,” said HHC President Alan D. Aviles. “HHC is well on the way toward our ultimate goal, to become one of the safest healthcare systems in the nation by the end of 2010 with zero hospital-based infections.”
The rates of VAP in the ICUs dropped to 1.3 infections per 1000 ventilator days in 2009 from 2.0 in 2008, following a steady and dramatic reduction from 10.5 in 2005. In addition, 12 ICUs went the entire year without a VAP case.
VAP is a particular risk for patients who are on mechanical ventilation for more than 48 hours. It is an infection of the lung which makes oxygen exchange difficult for patients. To reduce VAP rates, HHC follows a bundle of interventions that includes elevating the head of the bed, a “sedation vacation,” performing oral hygiene daily and screening for blood clots and ulcers.
The 2009 rate of 3.4 central line infections per 1,000 patient days is a substantial drop since 2005 when the rate was 7.6, though it was a very slight increase over the 2008 rate of 3.0. In addition, three ICUs went the entire year without a single central line infection, and 18 ICUs were able to achieve five months or more without a central line infection case. Central lines, also called central venous catheters, are necessary for many patients in ICUs for both treatment and monitoring purposes. Patients who need central lines are often very sick and are more vulnerable to infections, and remain in the hospital longer. Preventing central line infections is especially crucial for these patients.
To reduce central line infections, HHC hospitals follow a bundle of interventions that begins with hand washing, followed by the use of a better-acting skin antiseptic, the selection of the optimal catheter site, and the prompt removal of unnecessary lines, among other measures. Following common industry practice, the rate of infection is based on the number of infections that occur for every one thousand patient days of possible exposure, which includes patient days on a ventilator or patient days involving central lines. If these rates had not continued to drop since 2006, close to 1,500 HHC patients would have sustained a hospital-acquired infection and possible death.
The HHC system-wide mortality rate also continues to drop and has remained low at 1.46 percent for 2009, compared to the 2008 rate of 1.48 percent. Despite a significant increase in the average acuity of patients, this rate continues to be better than the most recently published national figure of 2.04 percent and regional figure of 2.26 percent.
HHC has adopted a number of other advanced technology strategies to continue to bring the number of infections down. As part of the $10 million HHC Institute for Medical Simulation and Advanced Learning scheduled to open in the fall, more than 450 HHC staff have already participated in mobile medical simulation classes that allow residents to practice and perfect central line placement on high tech mannequins.
And, with a new software-based approach to reducing the risk of VAP, the ICU Ventilator Bundle Order Set (VBOS), clinicians corporate-wide can order specific elements of the bundle automatically in the electronic medical record. The orders are sent directly to the appropriate service – medication orders go to the pharmacy, “sedation vacation” and “elevation of the head” orders would go to nursing. Bundles are a set of orders which provide a more efficient, effective and safer way of delivering care. Hospital-acquired infections are a nationwide problem. It has been estimated that each year nearly two million patients get an infection while being treated in our nation’s hospitals, and almost 100,000 of them die. The U.S. Centers for Disease Control estimates the cost of hospital-acquired infections to be as high as $27.5 billion each year.