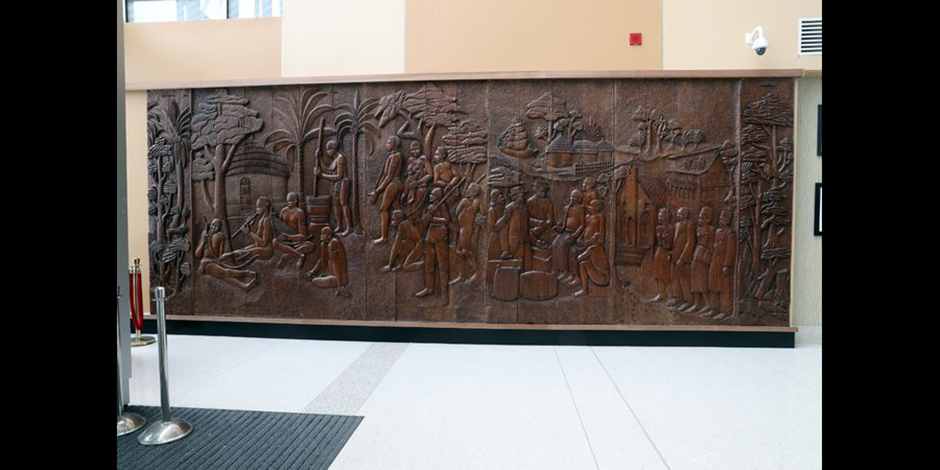 An important mahogany relief sculpture, titled “The Liberian Relief,” is now on display at NYC Health + Hospitals/Harlem. The owner, Maria King-Wallace, has provided the unique Liberian artwork to the hospital on long-term loan as a way of sharing more broadly the truths about the journeys of African Americans.

“The Liberian Relief” tells a story of slavery over time. The relief, commissioned for the 1979 Organization of African Unity (OAU) Conference, hosted by the Government of Liberia, was the culmination of two years’ labor by the Liberian sculptor and carver Alfred Yeagon. The piece was not collected after completion and remained forgotten in Mr. Yeagon’s workshop until its rediscovery, purchase, and shipment to the United States, in the early 1980’s, by its owner, Maria King Wallace.

The relief is remarkable not only for its beauty but for its powerful representation of the horrors of slavery and the consequences for those who gained their freedom. This work of art is even more exceptional since it escaped destruction. Many of Mr. Yeagon’s public sculptures did not survive the long civil war in Liberia. Mr. Yeagon is deceased.

“The Liberian Relief” chronicles four scenes in the history of African Americans:

The second scene represents the arrival of slave traders, their ships on the horizon, and shackled men and a woman with her child being forced to board the ships.

The third scene portrays the arrival in Africa of freed African American slaves, who were considered disruptive elements in the society by slave owners. They were compelled to leave the United States. The newly arrived surround a man, hand outstretched, petitioning an African chief for land to resettle.

The fourth scene depicts the descendants of the uprooted African Americans, known as Americo-Liberians, who became the educated class and founders of the Republic of Liberia.

“The Liberian Relief” is on display in the Atrium of The Mural Pavilion.

“NYC Health + Hospitals/Harlem is pleased and proud to welcome ‘The Liberian Mural.’ It has been a privilege for us all to work with Maria King Wallace to make this world-class artwork available for our community to experience. Our hospital has long understood the power of art to make a clear contribution to the delivery of better health, well-being, and improved experience for patients and staff alike,” said Ebone M. Carrington, MPA, FABC, Chief Executive Officer and Chief Operating Officer of NYC Health + Hospitals/Harlem. “‘The Liberian Relief’ has transformed the lobby of The Mural Pavilion and enhanced our therapeutic environment by inspiring, offering hope, and most of all lifting the spirits of those who come to us for care. We welcome this impressive addition to our collection of historic and contemporary artworks.”

“I did not know that African Americans were made to leave the United States upon gaining their freedom until I saw it depicted in the third scene of ‘The Liberian Relief.’ I was moved by the poignancy of Americans asking to be allowed back in Africa, the land of their ancestors; that and its beauty were the reasons I bought the Relief. This magnificent artwork shows the truth about the journeys of African Americans,” said Maria King Wallace.