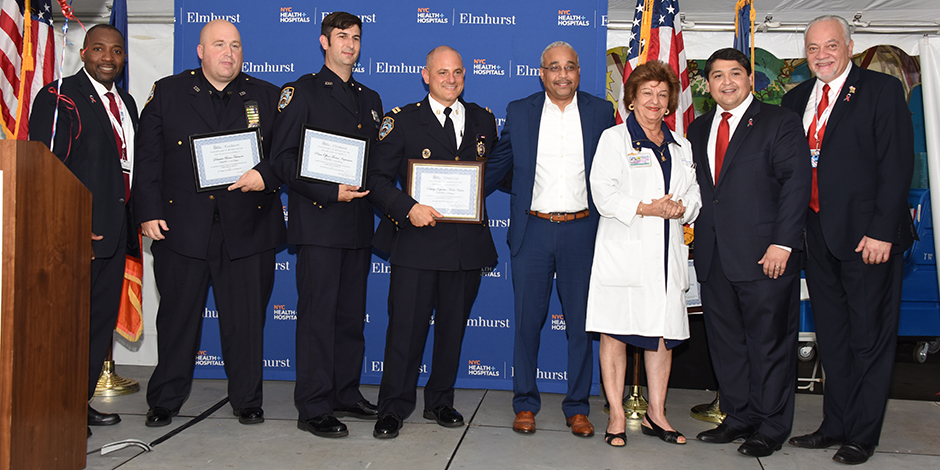 NYC Health + Hospitals/Elmhurst honored first responders from local NYPD precincts, FDNY companies, and EMS stations at the hospital’s First Annual Red, White, and Blue Tribute on September 27. First responders were celebrated at the recognition and awards ceremony for their outstanding commitment to protecting the community and assisting the hospital in its mission to provide high-quality health care to the residents of Queens. NYC Health + Hospitals/Elmhurst leadership and staff were joined by several local elected officials, including New York State Assembly Members Brian Barnwell and David Weprin, and New York State Senator Jose Peralta.

“Our Red, White and Blue Tribute is NYC Health + Hospitals/Elmhurst’s way of thanking New York’s first responders who work in partnership with us each day to save lives,” said Israel Rocha, chief executive officer, NYC Health + Hospitals/Elmhurst. “As health care providers, we are continuously inspired by these extraordinary men and women and their unwavering dedication to our community. We are excited to have the chance to show our appreciation and honor them for their hard work.”

“I applaud Elmhurst Hospital for honoring first responders, people who protect our communities, keep us safe, and put their lives on the line day after day. These are our everyday heroes, and it is vital that we recognize police officers, firefighters and EMS workers so they know their heroic work does not go unnoticed. It was great to take part in the first annual Red, White and Blue Tribute, honoring our first responders,” said New York State Senator Jose Peralta.

“We are very lucky to have such heroic people that we refer to as first responders,” said New York State Assemblyman Brian Barnwell. “The number of people that have been saved because of these heroes cannot be calculated. We should honor them every day.”

“I am honored to support the men and women that place others before themselves every day,” said New York State Assemblywoman Alicia Hyndman. “The unwavering devotion of our first responders helps keep New York City and its residents safe 24/7.”

“When we have the unfortunate circumstance of being in an emergency, the first thing we think about is help and how to get it fast. I want to thank our first responders for their tenacity and their ability to act as fast as they do to help the people of the City of New York on a daily basis,” said Assemblyman David Weprin.

“All of the first responders being honored during this Red, White, and Blue Tribute have my deepest thanks for their hard work, tireless dedication and sacrifice in service to their fellow city residents,” said Queens Borough President Melinda Katz. “Congratulations to the honorees and thank you to NYC Health + Hospitals/Elmhurst for organizing this wonderful tribute.”