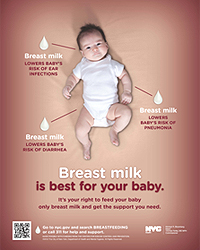 New York City Health Commissioner Thomas Farley today launched “Latch On NYC,” a new citywide initiative to support mothers who breastfeed their infants by asking city maternity hospitals to voluntarily sign on to support a mother’s choice to breastfeed and limit the promotion of infant formula in their facilities which can interfere with that decision. Twelve private New York City hospitals have already made the commitment and all 11 public hospitals run by the New York City Health and Hospitals Corporation also joined “Latch On NYC,” going beyond the significant steps they previously took to support breastfeeding when they banned formula from gift bags and promotional materials in 2007. Additionally, a new Health Department subway and hospital poster campaign showing the benefits of breast milk, such as reducing the risk of ear infections, diarrhea, and pneumonia, will launch next week. Commissioner Farley made the announcement at Harlem Hospital, the city’s first Baby Friendly Hospital, where he was joined by New York City Health and Hospitals Corporation president Alan D. Aviles and other executives representing more than half of all maternity hospitals in New York City.
“Human breast milk is best for babies and mothers,” said Commissioner Farley. “When babies receive supplementary formula in the hospital or mothers receive promotional baby formula on hospital discharge it can impede the establishment of an adequate milk supply and can undermine women’s confidence in breastfeeding. With this initiative the New York City health community is joining together to support mothers who choose to breastfeed.”
“HHC has been banning formula from gift bags and promotional materials from our labor and delivery units since 2007,” said HHC President Alan D. Aviles. “We are proud to have been a leader in supporting and educating mothers on the benefits of breastfeeding. We are committed to doing all we can to improve the health of the littlest New Yorkers and encourage the use of mother’s milk for the 22,000 babies born in our hospitals each year.”
“Mothers who choose to breastfeed their baby are making a healthy choice for their child and themselves,” said State Health Commissioner Nirav R. Shah. “We commend Dr. Farley and the City Health Department for launching this new initiative and partnering with health care facilities to encourage breastfeeding, beginning when a new mother is still in the hospital. Medical evidence shows that breastfeeding leads to better health outcomes and is a great way to protect the health of your child from day one.”
“Greater New York Hospital Association strongly supports the efforts of its member hospitals to assist and encourage breastfeeding to improve the health and long-term well-being of newborns,” said Greater New York Hospital Association president Kenneth E. Raske.
Ninety percent (90%) of NYC mothers start breastfeeding. However, by the time the baby reaches two months, only 31% of NYC mothers are still exclusively breastfeeding. The American Academy of Pediatrics recommends exclusive breastfeeding for the first six months of a baby’s life. Breastfed babies are much less likely than formula-fed babies to get ear, respiratory and gastrointestinal infections, and are also less likely to develop asthma. Breastfeeding is also beneficial to mothers — women who breastfeed have a reduced risk of ovarian and breast cancers.
The promotion and marketing of infant formula often interferes with breastfeeding. Breastfeeding mothers report that receiving free formula at hospital discharge can make them feel like their breast milk is not enough to satisfy their babies. In NYC, the most common reasons women stop breastfeeding are due to concerns about milk supply; 47% of women report they stopped breastfeeding because they thought they weren’t producing enough milk and 44% because they thought the infant wasn’t satisfied with breast milk alone. These concerns, although common, are largely unfounded because most mothers do produce enough milk to meet their babies needs if they exclusively breastfeed. These concerns can be addressed while the mother is still in the hospital. However, without the support and education these mothers need, many of them turn to formula.
Beginning to breastfeed from the start is also important for planning a baby’s diet for the first year of life. If the baby is not given anything but breast milk, especially in the first month after the baby is born, almost every mother will make enough milk for her baby. Using baby formula during this time can decrease the production of milk, and consequently make the mother reliant on formula.
By joining this voluntary initiative for NYC maternity hospitals to support mother’s decision to breastfeed participating hospitals have agreed to:

Gouverneur provides primary and specialty outpatient care through its Diagnostic and Treatment Center (D&TC) and residential care for the elderly and infirmed in its Nursing Facility (NF). As such, Gouverneur serves a diverse population that includes vulnerable young and old, who are likely to be indigent, uninsured or receiving public assistance. A majority of those seeking care are members of ethnic minorities such as Asian, Hispanic or African-American.