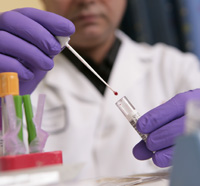 New York City Health and Hospitals Corporation (HHC) today announced that as part of the public hospitals’ commitment to making HIV testing a routine part of care, HHC tested 187,732 patients in Fiscal Year 2009. That is a 17% increase from the 161,089 patients tested last year and a 200% increase from just four years ago. More than 1,800 patients tested this year learned that they were HIV positive and were linked to care.
HHC will commemorate World AIDS Day by continuing efforts to expand access to HIV testing, treatment and prevention resources for all New Yorkers – regardless of ability to pay. Through HHC’s HIV Testing Expansion Initiative over 500,000 New Yorkers have been tested in the first four years of the initiative and over 6,500 HIV positive diagnoses have been made. On average, 90% of the individuals identified as HIV positive were linked to life-saving care within 90 days of their diagnosis, and the majority –60%– entered care within the same month they were diagnosed.
HHC has steadily expanded the routine offering of rapid HIV tests to patients in emergency rooms, in-patient units, clinics, and non-traditional sites like bathhouses, as well as through innovative programs like Project BRIEF. At two Bronx public hospitals, Jacobi Medical Center and North Central Bronx Hospital, Project BRIEF offers multi-lingual HIV counseling in emergency room waiting areas using computerized tablets that provide privacy while increasing access to screening, testing and care. In four years, over 29,000 patients — more than 90% of those approached — have agreed to be tested, an unprecedented acceptance rate.
“HIV is still a crisis in our city, and the rise in HIV rates among Black and Hispanic youth is particularly alarming. By making testing available in as many settings as possible, and as a routine medical screening, we are increasing the numbers of early detections­, one of the most important aspects of fighting this devastating illness,” said HHC’s President Alan D. Aviles.
An estimated 20,000 New Yorkers, one in five people living with HIV, do not know they are infected. New York City remains the epicenter of the HIV/AIDS epidemic in the United States, with the highest number of AIDS diagnoses in the country. Among people under 65, HIV is the third leading cause of death in the city.
HHC’s 11 acute care hospitals are Designated AIDS Centers. All HHC hospitals, diagnostic and treatment centers, and clinics offer specialized HIV care to all New Yorkers, regardless of ability to pay or immigration status. To find a public hospital or health center providing HIV testing and treatment in New York City, visit www.nychhc.org/hhc or call 311.