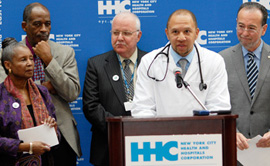 National Association of Public Hospitals and Health Systems (NAPH) President and Chief Executive Officer Bruce Siegel, MD, MPH, today announced the results of an analysis conducted by NAPH that shows public healthcare safety net systems like the New York City Health and Hospitals Corporation (HHC) not only keep their communities healthy but also drive significant economic activity and are often the largest employers in their region. As the largest NAPH member, HHC contributed a total of $11.7 billion in Fiscal Year 2009 and supported more than 71,600 jobs in the five boroughs and across the region, according to the NAPH data.
NAPH conducted the analysis as part of its national advocacy effort to raise awareness about the harmful effects of proposed Medicaid cuts being considered by the Joint Select Committee on Deficit Reduction, which will put at risk the long-term financial stability of HHC, a healthcare system that disproportionately serves the poor and derives a major portion of its funding from Medicaid. The NAPH economic impact study shows that public hospitals and health systems across the nation contributed to more than 800,000 jobs nationally and circulated $120 billion into the economy.
“HHC not only provides the health care on which 1.3 million New Yorkers depend, but its community health centers, nursing homes, hospitals and health plan also produce jobs and contribute to the vitality of the New York City and New York state economies. By keeping New Yorkers healthy and working, safety net providers like HHC demonstrate their vital importance to our nation,” Dr. Siegel said.
“Safety net providers are being stretched to the breaking point to keep up with the increasing demand for their services and cannot withstand further cuts. Reductions to Medicaid would not only harm Medicaid enrollees, but also force safety net health care systems to scale back, reducing jobs and the vital support to the economies in the communities they serve. As Congress, the administration and state governments consider spending cuts to meet budget obligations, it is important to recognize how critical the healthcare safety net is during the current fiscal crisis, and the crucial role it will play as the nation moves toward a reformed health care delivery system,” Dr. Siegel added.
NAPH used an economic multiplier established by the federal Bureau of Economic Analysis to determine how jobs in a hospital system affect total jobs in the state economy and the effect of hospital expenditures on total output in the state economy. Dr. Siegel announced the economic impact data at a press event at Bellevue Hospital Center, one of the nation’s oldest public hospitals. He was joined by HHC President Alan D. Aviles, city labor leaders, and local business owners from Queens and Brooklyn whose businesses depend on HHC hospitals.
“We make an impact because we create jobs and purchase services, supplies and equipment from vendors,” HHC President Alan D. Aviles said. “But we also make an impact because every day the doctors, nurses, and staff who work in our hospitals and community health centers stop on the way to work to buy coffee and a bagel, they drop off clothes at the dry cleaner or shoes at the shoe repair. They shop at nearby stores and walk across the street to have lunch at local restaurants, bringing life and vitality to local business communities.”
“Health and Hospitals Corporation facilities not only provide vital health care services for the men, women and children of New York, but they also provide valuable jobs for the members of our community,” said Deputy Mayor for Health and Human Services Linda I. Gibbs. “It is critical that we do everything we can to preserve the long-term stability of our safety net hospitals for both the sake of our patients and our City’s economic growth.”
“HHC facilities are the lifeblood of the city’s hospital system,” Council Speaker Christine C. Quinn said. “Not only do they help keep New Yorkers healthy, but the jobs and business activity they generate keep our economy healthy as well. The proposed cuts to Medicaid threaten HHC’s long-standing services for economically disadvantaged New Yorkers. In these fiscal times, we cannot afford to jeopardize the health of New Yorkers and the health of the city’s economy. Creating and retaining jobs in health care has the potential to boost our economy and benefit all New Yorkers, keeping our city’s neighborhoods strong and thriving for years to come.”
“Elmhurst Hospital has been such a vital part of our community and my restaurant,” said Steve Tatarian, owner of La Fusta Restaurant in Queens. “I can’t remember a time when our establishment wasn’t serving the outstanding physicians, nurses and other staff of the hospital.”
“Woodhull Medical and Mental Health Center is essential for my business and the community that surrounds it,” said Julie Shadrin, CEO of Woodhull Medical Supply in Brooklyn. “My business has already been negatively impacted by Medicare cuts. My customers cannot afford crucial medical supplies like diabetic testing supplies and other chronic illness treatments.”
The NAPH analysis reinforces the findings of a June 2011 report by Families USA which show the severe impact that proposed cuts to federal Medicaid spending would have on states’ economies. Among its key findings, the Families USA report concludes that New York would be among the top 10 states to face the largest potential loss of business activity with estimated losses of $3.8 billion to its economy and 28,830 lost jobs as a result of a 5 percent cut in Federal Medicaid spending. With a 15 percent cut in Federal Medicaid spending, New York would be at risk of losing $11.4 billion in economic activity and 86,480 jobs.
A copy of the NAPH full policy brief with state specific data is available at www.naph.org.

About the National Association of Public Hospitals and Health Systems (NAPH)

NAPH represents the nation’s largest metropolitan hospitals and health systems that fulfill a safety net mission of providing high volumes of care to low income individuals. These facilities provide high‐quality health services for all patients, including the uninsured and underinsured, regardless of ability to pay. In addition to functioning as the country’s default national health insurance system, public hospitals provide many essential communitywide services, such as primary care, trauma care and neonatal intensive care. Public hospitals also train many of America’s doctors, nurses and other health care providers. Since its inception in 1980, NAPH has cultivated a strong presence on Capitol Hill, with the executive branch and in many state capitols. NAPH advocates on behalf of its members on such issues as Medicaid, Medicare and access to health care services for vulnerable populations. For more information, visit our website at www.naph.org/.