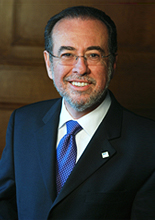 New York City Health and Hospitals Corporation (HHC) President Alan D. Aviles was named one of the “100 Most Influential People in Healthcare” by Modern Healthcare. This is the third time that Mr. Aviles has been named on the esteemed list of influential leaders in healthcare. He is joined by national figures, including President Barack Obama, Health and Human Services Secretary Kathleen Sebelius, U.S. Surgeon General Regina Benjamin and many other prominent healthcare leaders across the country.
Modern Healthcare announced the call for nominations earlier this spring and received more than 414,000 submissions within two months. The top 300 candidates based on those nominations made up the final ballot for this 10th annual recognition program. Readers and senior editors at the magazine then casted their votes, both representing 50 percent of the final outcome, in order to ultimately reach the top 100 healthcare leaders for 2011. This year, readers submitted 445,400 ballots for a total of more than 2.2 million votes.
See the 2011 list of healthcare leaders.
Read the analysis of this year’s report.