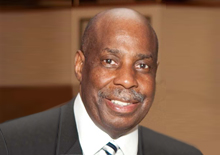 The New York City Health and Hospitals Corporation announced that a new public healthcare facility under construction in Harlem will be named after local philanthropist Henry “Hank” J. Carter, founder of Wheelchair Charities, Inc., in recognition of his 40 years of support to New Yorkers with disabilities and more than $25 million in donations to HHC’s Coler-Goldwater Specialty Hospital and Nursing Facility (Coler-Goldwater). This is the first time HHC will name one of its public healthcare facilities for a living individual.
“Naming this new facility after Hank Carter is a fitting tribute to his remarkable generosity and compassionate spirit,” said HHC President Alan D. Aviles. “Hank Carter has given the HHC family much more than valuable equipment to help our patients. He has dedicated hours of personal time to regularly walk the hallways of our facility. He knows the names of our patients and their stories of survival. And they know him as a friend and a man of faith who deeply cares for their well-being.”
“To those whom much is given, much is expected. God has given me faith, health, and the ability to help others. And He has put so many great people in my path to support my life’s work. I credit God for what I have been able to give back to my community. This is really an honor,” said Henry J. Carter.
The Henry J. Carter Specialty Hospital and Nursing Facility will be located on Madison Avenue and 122nd Street in Manhattan, and will be the new home of the Goldwater Specialty Hospital and Nursing Facility (Goldwater) currently located on Roosevelt Island. The new Harlem based long-term care hospital and skilled nursing facility, a state of the art facility of nearly 400,000 square feet of combined new and renovated space, will be completed in late fall of 2013. The HHC Board of Directors unanimously approved the naming at its June meeting.
Through Wheelchair Charities, Carter has donated more than $25 million to HHC for a variety of equipment and programs for patients and residents at Coler-Goldwater, including thousands of manual and motorized wheelchairs, specially equipped buses, modified beds, therapy equipment and more than 1,000 state-of-the-art computers that feature voice recognition, zoom-text, and a pointer device to facilitate use by quadriplegic individuals as well as wheelchairs that are computer interfaced and can be operated by the movement of a patient’s eye. He has also been a major supporter of HHC’s fundraising arm, The Fund for HHC, and the STAT! For New York City’s Public Hospitals! series of music and arts events.
“Relocating Goldwater, which was built in the 1940s, to the Harlem community in a new, modern, patient-centered space, will bring several distinct benefits, but none will be more positive for residents than the ongoing involvement and support provided by Hank Carter,” added Aviles.
“We are forever grateful to Hank Carter. This naming tribute is in recognition of the amazing partnership between Mr. Carter and the public hospital system which has enabled our patients and residents to reach their fullest potential and live a much improved quality of life. This new facility in Harlem will personify the heart and grace of Hank Carter,” said Lynda D Curtis, HHC Sr. Vice President of the South Manhattan Network.
“There is simply no way to adequately thank our friend Hank Carter. We refer to him as a ‘living treasure,’ but even that term doesn’t capture his dynamic and altruistic spirit,” said Robert K. Hughes, Executive Director, Coler-Goldwater. “He has devoted so much of himself on behalf of our patients and residents.”

Hank Carter grew up in the Queensbridge Projects, Long Island City, New York. He attended P.S. 1 on 21st Street, graduated from Long Island City High School and attended Baruch College. After enlisting in the United States Army, Hank served in Vietnam. In the Army, he rose to Sergeant and was awarded the Army’s Good Conduct Medal, a Bronze Star and other military honors.
He founded Wheelchair Charities, Inc. nearly 40 years ago after his friend was hit by a stray bullet during a shoot-out on a city street and was paralyzed from the chest down. While visiting his friend at Coler-Goldwater, Hank connected with the special needs of the patients and residents and began a 37 year commitment to bettering the lives of others through Wheelchair Charities, Inc.

The New York City Health and Hospitals Corporation began construction of the Henry J. Carter Specialty Hospital and Nursing Facility in January 2012. The new facility will feature two separate buildings along Madison and 122nd Street that will be designed to provide medical, sub- acute, rehabilitative and skilled nursing home care in a modern environment. The facility will serve medically fragile individuals who need long-term acute hospital care, including more than 100 patients who require ventilator support, as well as individuals who require rehabilitation and other therapeutic services provided by a skilled nursing facility.
The new skilled nursing facility (SNF) will feature 164 beds and will be built on the grounds of the parking lot of the former North General Hospital. The building will have six stories and more than 120,000 square feet of space. The SNF building will feature two-bed suites with private sleeping areas, light-filled living spaces, family style dining rooms, open kitchens and a concourse of activity spaces.
The 201 bed long-term Care Acute Care Hospital (LTACH) will be housed in fully renovated space in the former North General Hospital building. The LTACH will span seven stories of more than 270,000 square feet.
This $285 million project is being financed through New York City general obligation bonds and New York State HEAL grant funds. Both buildings will be designed to meet Leadership in Energy and Environmental Design (LEED) green standards. The project is being constructed by Gilbane Building Company/McKissack & McKissack, a joint venture. The architects are Array Healthcare Facilities Solutions with Geddis Architects.
HHC will host an official naming ceremony for the Henry J. Carter Specialty Hospital and Nursing Facility before the opening of the new building in late 2013.
See the news coverage on NY1 News, where Hank Carter was named New Yorker of the Week.