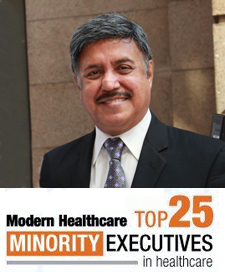 New York City Health and Hospitals Corporation (HHC) President Ram Raju, M.D. has been selected as one of Modern Healthcare Magazine’s “2014’s Top 25 Minority Executives in Healthcare.” He is joined by an esteemed list of national healthcare leaders from some of the country’s top healthcare organizations. Dr. Raju was chosen for this same honor in 2012.
“I am honored to be named among this influential list of minority healthcare executives,” said Dr. Raju. “Returning as president of HHC, I look forward to continuing my commitment to public health, focusing on patient wellness, quality of care, and access to care for all New Yorkers.”
Dr. Raju began his healthcare career as a vascular surgeon in New York. In 2011, he served as CEO of Chicago’s Cook County Health & Hospitals System. In March, Dr. Raju returned to HHC as president and CEO, where he was previously its executive vice president, chief operating officer and chief medical officer.
This is Modern Healthcare’s fifth biennial listing of Minority Executives in Healthcare. Nearly 170 nominations were received, and nominees were judged in five categories including, successfully lead or managed an organization or company; showed the ability or power to effect change in the healthcare industry; demonstrated a willingness to share expertise with others; served as a role model or mentor to other minority healthcare executives; assumed a leadership position in the industry outside of the candidate’s own organization or company.
Read the full list of honorees.