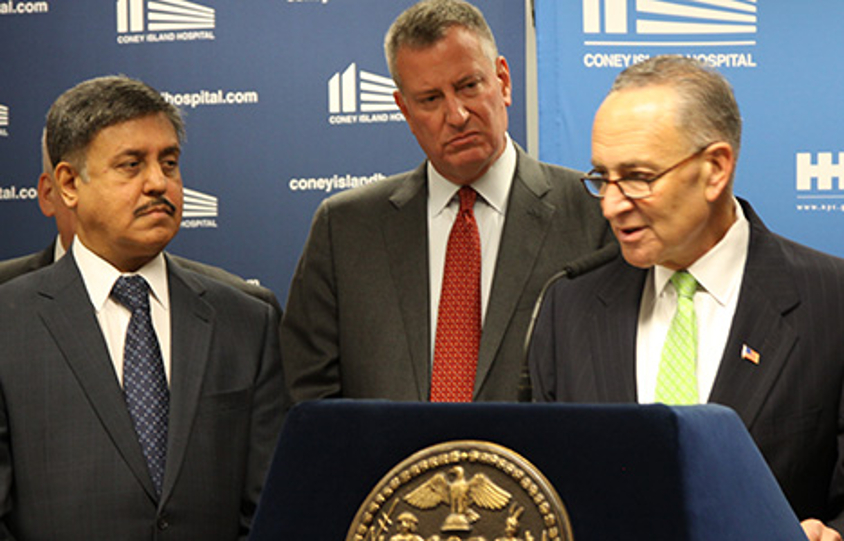 Today, Mayor Bill de Blasio and U.S. Senator Charles Schumer announced that the City has secured a commitment of at least $1.6 billion in funds from the Federal Emergency Management Agency (FEMA) to repair and protect the City’s public hospitals damaged during Hurricane Sandy.
The allocation – the second largest FEMA award ever and the largest award under FEMA’s 428 program – will advance the City’s comprehensive, five-borough resiliency plan and fund improvements at four New York City Health and Hospitals Corporation (HHC) facilities: Coney Island Hospital in Brooklyn, Bellevue Hospital Center in Manhattan, Metropolitan Hospital Center in Manhattan, and Coler Specialty Hospital on Roosevelt Island.
The at least $1.6 billion package will include reimbursement for repairs to HHC facilities for damage incurred during Hurricane Sandy, and funds for mitigation projects that will protect the hospitals from the impact of future extreme weather. It is in addition to the $142 million HHC already received from FEMA for emergency stabilization measures, partial repairs, and temporary flood barriers.
“Few services are as critical as our hospitals during extreme weather. This unprecedented investment will make four key public hospitals much more resilient next time they need to be,” said Mayor Bill de Blasio. “Thanks to FEMA’s $1.6 billion commitment, we’re taking a major step forward in advancing our comprehensive resiliency plan and ensuring that doctors, nurses, and health care workers will be able to do what they do best – serve their patients. We’re grateful for Senator Schumer’s continued partnership in securing these – and so many other -funds as we build a stronger and more resilient New York City.”
“This historic, over $1.6 billion federal investment will provide a massive shot of adrenaline for New York City’s public hospitals, and their physical and financial recovery from Superstorm Sandy,” said Senator Charles Schumer. “The largest of its kind, this FEMA Public Assistance award will help ensure that our public hospitals have the necessary safeguards in place to operate continuously during a storm, mitigate damage and power loss, and, if evacuation is necessary, quickly return to normalcy. Smart recovery and resiliency work at New York’s great public hospitals, which serve millions each day, is exactly what we had in mind when crafting the Sandy relief bill, and I’m thrilled to have helped deliver this federal funding.”
“Superstorm Sandy brought tremendous damage down on New York City’s hospitals – but today, we’re building them back better and stronger than ever before,” Governor Andrew Cuomo said. “By getting these four hospitals the resources they need to recover and become more resilient, we’re laying the groundwork for a safer and more prepared health network in the future. This is another step forward in our work to build a stronger New York State, and I want to thank all of our federal, local and community partners for helping to make this progress a reality.”
“New York City’s public hospitals serve a very vulnerable patient population and must not be allowed to remain susceptible to future storms,” said HHC President Dr. Ram Raju. “The local communities look to HHC hospitals for more than just health care, and the cost of shutting them down is human suffering. HHC hospitals returned to service quickly after Sandy thanks to the extraordinary efforts of their dedicated staffs, but they remain at risk. I’d like to thank FEMA for an aid package that recognizes the need for public hospital resiliency. And, of course, Mayor de Blasio and Senator Charles Schumer, for their efforts in helping the City’s public hospital system.”
The at least $1.6 billion in FEMA funds will cover:

“Hurricane Sandy highlighted the vulnerabilities of our health care system all over the city. Preparing our public hospitals for future storms and disruptions is a vital part of the City’s comprehensive climate resiliency plan,” said Daniel Zarrilli, Director of the Mayor’s Office of Recovery and Resiliency. “It is imperative to continue making investments like this to ensure that critical health care services are not jeopardized for our most vulnerable populations. We look forward to implementing these projects in partnership with FEMA and HHC.”
“As dean of the New York congressional delegation, I’m proud of great work of the Mayor and Senator Schumer, who worked especially hard to secure these additional funds from FEMA. We are strongly committed to ensuring that these central hospitals are fully equipped and rehabilitated to provide the best of care to our constituents,” said Congressman Charles Rangel.
“These federal funds will help ensure that our hospitals continue functioning without interruption when the next big storm hits,” said Congresswoman Carolyn B. Maloney. “The entire New York Congressional Delegation came together to fight for these funds, and wisely sought resources not just for repairs, but also for mitigation. The $1.6 billion package announced today will pay for resiliency efforts at Bellevue Hospital Center, Metropolitan Hospital Center, Coler Specialty Hospital on Roosevelt Island, and Coney Island Hospital.”
“The prognosis for Coney Island Hospital’s future has never looked better, thanks to the efforts of Mayor de Blasio, Senator Schumer, and New York’s Congressional delegation in securing $923 million in needed recovery and resiliency funds. Quality health care is critical for our communities, and this funding will ensure that our City can continue to deliver these services to southern Brooklyn, regardless of what Mother Nature throws our way. I will continue to work with these leaders to tackle the health and wellness challenges facing our borough,” said Brooklyn Borough President Eric Adams.
“I’m extremely grateful to Mayor de Blasio, Senator Schumer, and FEMA for securing this major investment in our public hospital system for repairs and improvements related to Superstorm Sandy. In my Senate district, Sandy forced Bellevue Hospital to evacuate 500 patients and shut down one of the busiest emergency rooms in the city. As recent events have shown, Bellevue is back, better than ever, and the $376 million from FEMA announced today will help fund the long-term plan to strengthen Bellevue further against storms that may strike in the future,â€ said Senator Brad Hoylman.
“These repairs and upgrades to our most critical infrastructure will enhance resiliency, and allow these hospitals to provide essential services in the event of the most serious emergencies. I’d like to commend Senator Schumer and Mayor de Blasio for their continual efforts in preparing New York City for future storms and other climate change impacts,” said Assembly Member Robert Rodriguez.
“As a representative of Bellevue, I was there to witness the valiant effort of HHC staff to keep the hospital operating in spite of Sandy’s floodwaters. That effort was ultimately unsuccessful, and we lost an essential institution at a critical time, because the physical infrastructure to protect the hospital simply wasn’t adequate. I thank Mayor de Blasio, Senator Schumer, and FEMA for ensuring that we have the funds to act on the lessons of Sandy, before the waters rise again,” said Assembly Member Brian Kavanagh.
“Not only must we repair damages from the storm, we must do all that we can to minimize future impacts to public health facilities like this vital southern Brooklyn institution that serves thousands of people. We can’t afford having Coney Island Hospital and others lose power and shut down emergency room access, when so many in our vulnerable residents rely on our public hospitals for critical and life-saving services. I appreciate the Mayor, Senator and Congressman for their leadership and partnership in ensuring our City hospitals get what they rightfully deserve to rebuild stronger than ever,” said Council Member Mark Treyger, Chair of the Committee on Recovery & Resiliency.
“These hospitals did extraordinary work in protecting their patients during Superstorm Sandy, while their buildings endured enormous damage in the process,” said Council Member Dan Garodnick. “These supplemental funds help to fix ongoing problems, while also protecting them from the next extreme weather event.”
“Rebuilding and resiliency for HHC hospitals are essential investments for a City prepared to take on the next Sandy,” said Council Member Ben Kallos, who represents Coler Specialty Hospital on Roosevelt Island. “Senator Schumer and Mayor de Blasio merit recognition for their leadership in securing FEMA federal funding and investing it in our public hospitals.”
“In the crucial months following Hurricane Sandy, residents were transported and referred to nearby hospitals. In a medical emergency, seconds can mean the difference between life and death,” said Council Member Chaim Deutsch. “I thank Mayor de Blasio and Senator Schumer for securing this substantial allocation that will strengthen Coney Island Hospital’s infrastructure, making the hospital more resilient to future extreme weather, improving our health care system, and safeguarding vital patient care.”
“Improving the resiliency of our public hospitals is critical to ensuring the health and safety of all New Yorkers. We applaud all levels of government in working together to secure these resources,” said Susannah Dyen, coordinator of the Alliance for a Just Rebuilding.

The NYC Health + Hospitals health care system is a $6.7 billion integrated healthcare delivery system, the largest municipal healthcare organization in the country, and one of the New York area’s largest providers of government-sponsored health insurance, MetroPlusHealth Health Plan, the plan of choice for nearly half a million New Yorkers. The NYC Health + Hospitals health care system serves 1.4 million New Yorkers every year and more than 475,000 are uninsured. The system provides medical, mental health and substance abuse services through its 11 acute care hospitals, five skilled nursing facilities, six large diagnostic and treatment centers and more than 70 community based clinics. NYC Health + Hospitals/Home Care also provides in-home services for New Yorkers. The NYC Health + Hospitals system was the 2008 recipient of the National Quality Forum and The Joint Commission’s John M. Eisenberg Award for Innovation in Patient Safety and Quality. For more information, visit www.nychealthandhospitals.org or find us on https://www.facebook.com/NYCHealthSystem or twitter.com/NYCHealthSystem.