Facilitated by The Fund for NYC Health + Hospitals, the performance aims to help patients suffering from Alzheimer's, dementia, and other cognitive loss 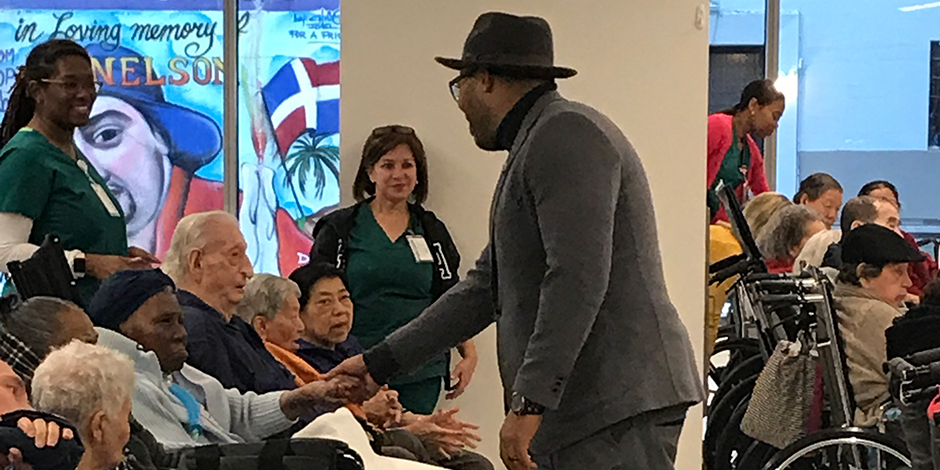 Eric Roberson, Grammy-nominated independent singer and songwriter, sang a set of songs on Friday for some 50 residents and staff of NYC Health + Hospitals/Gouverneur, a five-star 210-bed skilled nursing facility on the Lower East Side. Most of the residents in attendance have Alzheimer’s disease, dementia, or other cognitive loss.

Facilitated by The Fund for NYC Health + Hospitals—a health system division that seeks philanthropic support and creates alliances to drive the health system’s strategic priorities—Mr. Roberson’s performance was the latest installment in the Music & Memory Live program. The program creates interactive musical experiences by renowned musicians who use their talents to engage with patients who have cognitive deficits, as well as to raise awareness about the role of music in caring for such patients.

“I’m really excited to do this,” said Mr. Roberson, “As I travel the world and see the effect that my music has on people, my experience has taught me the importance of a program like Music & Memory and confirms my belief that music heals.”

Eric Roberson, who has performed under the name Erro, is regarded as one of the foremost independent R&B artists of the 2000s and 2010s. He has twice been nominated for Grammy Awards in the category of Best Urban/Alternative Performance—in 2009 for his song “A Tale of Two” and in 2010 for “Still.”

“Eric Roberson coming to Music & Memory Live to meet and sing for the residents of NYC Health + Hospitals/Gouverneur is a rare and wonderful gift for our patients, one that will deepen the precious connection through music that we seek for individuals with cognitive issues,” says Joe Schick, executive director of The Fund for NYC Health + Hospitals.

Music & Memory Live is the latest expansion of the broader Music & Memory program, which also brings personalized playlists on iPods to patients or residents with Alzheimer’s disease, dementia, or other cognitive loss. By providing patients and residents with their favorite songs or familiar music, Music & Memory demonstrates the powerful ability of music to engage patients, lift their affect, and support their memory retrieval, even in severely cognitively debilitated patients. Among the program’s benefits, many patients become less reliant on medications, which can in turn improve safety, quality, and satisfaction measures. Nationally lauded as a best practice, the program is in use at 12 NYC Health + Hospitals facilities and has touched more than 1,500 patients and residents.

About The Fund for NYC Health + Hospitals