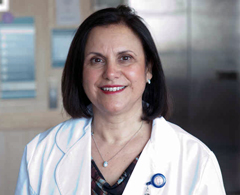 An outstanding nurse practitioner from the NYC Health and Hospitals Corporation was honored today by the Fund for the City of New York for her distinguished public service and leadership in behavioral health and palliative care. Donna Leno Gordon has dedicated over two decades of service at Coney Island Hospital, and has helped revolutionize care for chronically and terminally ill patients in New York City. Ms. Gordon is one of six award recipients who will be honored during a ceremony with Mayor Michael R. Bloomberg at the Cooper Union this evening.
“New York City is blessed with a great public workforce and this year’s honorees represent not only the best of government, but the very best of what our City has to offer,” said Mayor Bloomberg. “From improving how we respond to emergencies, to preserving the character of our diverse neighborhoods, to educating our children, these six individuals have given an incredible 145 years of service to their fellow New Yorkers. They are part of a deeply talented workforce that has applied innovation, hard work and dedication to help our City thrive.”
Ms. Gordon has been a pioneer in the field of palliative care and an innovator in providing exceptional care for the mentally ill. Under her leadership, Coney Island Hospital has become a local and regional leader in palliative care by launching its own dedicated 19-bed unit in 2010, expanding existing services and delivering unit-based coordinated care to patients with serious advanced disease, life threatening or debilitating illness. The palliative care team offers patient and family centered care that focuses on effective management of pain and other distressing symptoms to support the best quality of life for patients and their loved ones. The program was so successful at Coney Island that Gordon has helped implement palliative care programs at all other HHC hospitals.
“Palliative care begins with dedicated clinicians but it is each team’s commitment that makes it work,” says Gordon. “I wanted to design an operationally sustainable program that would be embedded in the continuum of care, ensuring that patients at the end of their lives have a voice.”
Presented annually by the Fund for the City of New York, the Sloan awards—considered by many as the “Nobel Prizes” of City government—recognize outstanding civil servants whose professionalism, commitment and accomplishments are truly extraordinary.  Ms. Gordon is one of six winners selected from among more than 250,000 eligible workers who come from all levels and ranks of New York City’s government.
Mary McCormick, President of the Fund for the City of New York said, “These six individuals are distinguished by their competence, ability to innovate, commitment to excellence and extraordinary performance, year after year and decade after decade. These winners could be making more money in the private sector, but they have dedicated their lives to serving the public and making New York a leader among cities. All New Yorkers are in their debt.”
“This award recognizes Ms. Gordon’s long-standing and deep commitment to her patients as well as her innovative efforts to strive for excellence in healthcare delivery,” said HHC President Alan D. Aviles. “I offer my gratitude and congratulations for being chosen among a competitive group of nominees from all city agencies and on winning this significant recognition for exemplary government service. Her dedication is an inspiration to us all.”
“Ms. Gordon’s work in the field of palliative care can only be called extraordinary,” said Arthur Wagner, Executive Director of Coney Island Hospital.  “She has been able to take an entire field of Medicine, one that was once dismissed by the medical establishment and narrowly viewed as only being applicable to the dying patient, and transformed it into one that is now widely accepted and highly regarded as an essential and invaluable component in the continuum of patient centered care.”
The Fund for the City of New York was established by the Ford Foundation in 1968 with the mandate to improve the quality of life for all New Yorkers. For over three decades, in partnership with government agencies, nonprofit institutions and foundations, the Fund has developed and helped to implement innovations in policy, programs, practices and technology in order to advance the functioning of government and nonprofit organizations in New York City and beyond.