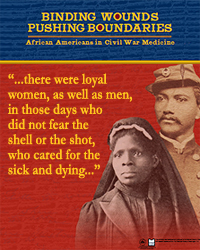 Coney Island Hospital today opened a historical exhibition in observance of the 150th Anniversary of the American Civil War which highlights the untold history of medical contributions made by African Americans during the war. The traveling exhibition, developed and produced by the Exhibition Program at the National Library of Medicine, tells the unique story via archival images and historical documents from the period.
According to the National Library of Medicine, many histories have been written about medical care during the American Civil War, but the participation and contributions of African Americans as nurses, surgeons and hospital workers has often been overlooked. Binding Wounds, Pushing Boundaries: African Americans in Civil War Medicine looks at the men and women who served as surgeons and nurses and how their service as medical providers challenged the prescribed notions of race and gender pushing the boundaries of the role of African Americans in America.
The exhibit explores the life and experiences of surgeons Alexander T. Augusta and Anderson R. Abbott, and nurses Susie King Taylor and Ann Stokes as they provided medical care to soldiers and civilians while participating in the fight for freedom. “Binding Wounds, Pushing Boundaries opens the door to this rarely studied part of history and brings a voice to those that have remained silent for nearly 150 years,” says Curator Jill L. Newmark.
The four year civil war claimed the lives of approximately 620,000 out of the three million who fought, and countless others received severe debilitating injuries. The 150th Anniversary observation serves to remind us all of what was at stake: the preservation of the fledgling union and the resultant freedom of millions of men and women enslaved by the Confederate states.
“Hosting this national exhibition is the hospital’s way of observing the anniversary of the beginning of our country’s civil war and more importantly, paying tribute to the little known but significant contributions made by African Americans towards preservation of the union, and in the areas of medicine and human rights,” said Arthur Wagner, Senior Vice President / Executive Director of Coney Island Hospital.
“Binding Wounds, Pushing Boundaries” will be on display now through August 3, 2011. The exhibit is located in the gallery space on the 2nd floor of Main Hospital Building and is open to the public Monday through Friday, from 9:00 AM – 5:00PM.

From its early beginnings in 1875 as a first-aid station for summer beach goers, Coney Island Hospital has grown into a multi-site community medical center with more than 350 beds. Part of the New York City Health and Hospitals Corporation (HHC), Coney is a designated Stroke Center and provides over 267,000 clinic visits and 70,000 Emergency Room visits to the communities of southern Brooklyn. For more information about Coney, visit coneyislandhospital.com.