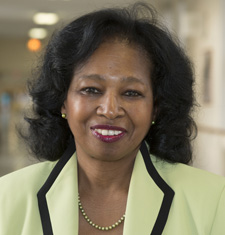 An outstanding nurse from Coler-Goldwater Specialty Hospital and Nursing Facility who has dedicated her 45-year career to advocating and caring for physically fragile and vulnerable patients has been honored by the Fund for the City of New York with the Sloan Public Service Award.
Stanlee Richards, RN, Director of Goldwater Nursing at Coler-Goldwater, one of four public nursing facilities of the New York City Health and Hospitals Corporation (HHC), was recognized Wednesday by Mayor Michael R. Bloomberg with the prestigious award presented to public servants and regarded as the Nobel Prize of city government.
“New York City’s public workforce is as good a group of people as you can ever find,” said Mayor Bloomberg. “Sloan Award honorees come from every walk of life and professional experience and the share an unwavering commitment to excellence; unmatched personal integrity; and, above all, a tireless devotion to service. Each of these outstanding public servants are working on the frontlines, making life better for New Yorkers every single day.”
“This award recognizes Mrs. Richards’ deep commitment to her patients,” said HHC President Alan D. Aviles. “She has been able to draw on her longstanding relationships with Goldwater residents and her insights into their daily lives and medical concerns to help shape the hospital’s clinical improvement efforts. I offer my gratitude and congratulations to Mrs. Richards for being selected from among a competitive group of nominees and for winning this significant recognition of exemplary service.”
“We have a mission and a vision, and the most important thing is that we ensure that every day our patients and residents get the best care and the highest quality care so they can live their lives to their fullest potential,” Richards said.
Richards oversees the quality and safety of health services for more than 700 patients and residents who require specialized care. Starting as a nurse’s aide in 1967 and rising steadily to become Director of Nursing, where she also manages 590 staff members, Richards has spent decades providing patients the highest standards of care in a nurturing environment. Her accomplishments include:

For more than two decades, Richards also served her country as a member of the U.S. Army Reserve Command, rising to the rank of Major before retiring in 2007. As a reservist, Richards was recognized by the military for her superior service as an officer in charge of a trauma training program for soldiers preparing for deployment. Until 2011, she worked with the Army through the Family Readiness Group, a specialized team that provided activities and support for families adjusting to military deployments.
“When it comes to helping those in need, the word ‘no’ is not in her vocabulary,” said Robert K. Hughes, executive director of Coler-Goldwater. “Mrs. Richards is a true testament to exemplary service to our health system and our city.”
Richards is one of six extraordinary New York City government employees who were honored Wednesday with Sloan Public Service Awards, presented annually by the Fund for the City of New York (FCNY) to civil servants selected for their exemplary job performance and tireless dedication to the public. The recipients have long and distinguished records of serving the City in a diverse range of occupations, working in libraries, sanitation, collaboration with community-based organizations, public schools, nursing, and traffic enforcement. This year’s awards, which come during a year in which Superstorm Sandy tested city public services, mark the 40th anniversary of the program, which began in 1973.
Sloan Public Service Award winners come from all levels and ranks of City government, and are selected by a diverse and independent panel chaired by The Most Reverend Joseph M. Sullivan. Winners receive a cash prize of $10,000. The award recipients were honored throughout the day Wednesday at their individual workplaces and in the evening with a ceremony at The Cooper Union.