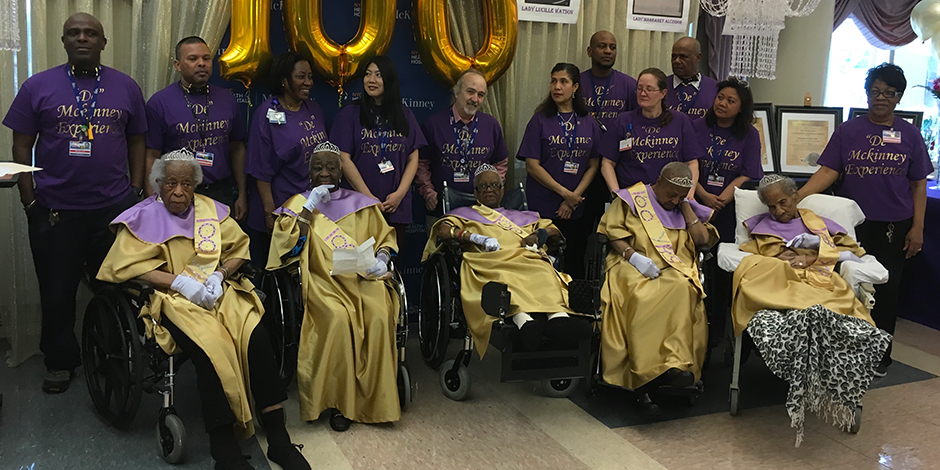 NYC Health+ Hospitals/McKinney honored yesterday six of its women centenarian residents as part of a Women’s History Month celebration. The women—ranging in age from a few days shy of 100 to 103—and their families were joined by staff and local elected officials to celebrate with presentations, awards, proclamations, and entertainment. Together, they celebrated 600+ years of life.

“While it is remarkable, it is also an honor to have six women centenarians living at NYC Health + Hospitals/McKinney,” said David Weinstein, chief executive officer, NYC Health + Hospitals/McKinney. “Each of the women adds value to all who interact with them, whether it’s someone on their care team or a volunteer. We are all grateful to each of them for the opportunity to learn from their stories and rich life experiences.”

“Our life stories are just as important as any other story, and the younger generation needs to learn and understand how they can grow old peacefully,” said Lucille Watson, who will celebrate her 100th birthday in April.

“I have been really excited about this event, and I thank NYC Health + Hospitals/McKinney for hosting. It is a special day, and I thank God for it,” said Ms. Watson.

Founded in 1997 NYC Health + Hospitals/McKinney is a 320-bed Post-Acute Care and Rehabilitation Center that offers highly specialized services for individuals in need of medically complex care and is a part of the largest public health system in the country. As one of the most reputable rehabilitation centers in the New York state area evidenced by its certification by the New York State Department of Health and the Joint Commission, NYC Health + Hospitals/McKinney has maintained its quality care five-star rating from the Centers of Medicare and Medicaid Services. For more information, visit www.nychealthandhospitals.org/mckinney