Battling a severe case of COVID-19, Freddy Virola was saved by expert teams at two hospitals and a lifesaving therapy

In March 2020, just a few days after his 40th birthday, Brooklyn native Freddy Virola started to experience the first frightening symptoms of COVID-19.

He was burning up with a fever, coughing frequently, and complained of body aches. Within a few days, his symptoms became worse: chills, headaches, a higher fever, and a loss of sense of smell and taste. His bed was soaked in sweat.

During one troubling moment, his wife Jasmine noticed Virola clutching his chest. His fever hadn’t subsided, and now he found himself unable to catch his breath. She called NYC Health + Hospitals/Woodhull and Virola was admitted on March 27.

At Woodhull, doctors found his oxygen levels were rapidly dropping. He was diagnosed with COVID-19 and intubated on March 29. But even after being put on a ventilator, his vital signs continued to worsen. Woodhull doctors knew they had to act fast and try something more aggressive—extracorporeal membrane oxygenation, or ECMO, an advanced therapy that replaces the function of the lung.

Yet, at the height of the pandemic’s surge, with resources spread thin, no nearby hospital offering ECMO would accept Virola as a patient. His doctors at Woodhull turned to their colleagues at NYC Health + Hospitals/Bellevue, where the medical team had just launched an ECMO program for severely ill COVID-19 patients.

“I called my colleagues at Bellevue and they said, ‘send him over right away,'” said Dr. Edward Fishkin, Chief Medical Officer at Woodhull. “My heart leapt when I got that response—Bellevue was just as anxious to receive Freddy as we were to transfer him. We were all so focused on Freddy and his care and getting him healthy again. It was such a wonderful collaboration between our two hospitals.

The Woodhull team worked quickly with Bellevue staff to rush Virola’s transfer from one hospital to the other. He became one of Bellevue’s first ECMO patients.

“When Freddy came to us, he was already intubated for a couple of weeks,” said Dr. Sripal Bangalore, Interventional Director of Bellevue’s ECMO Program. “He was not responsive for many weeks.”

And then, a miracle. After several weeks in Bellevue’s ICU, Virola’s vital signs suddenly began to improve. “I woke up almost two and a half months later,” he said, “My wife was there, and I had all these things attached to me.”

Bellevue is the only public hospital that offers ECMO treatment in the nation. Since Virola was discharged, Bellevue has provided the lifesaving therapy to nearly 30 patients.

“There are multiple people that wouldn’t be with their families today if not for our ECMO program,” said Dr. Norma Keller, Chief of Cardiology at Bellevue. “We’re hoping to be a model to other hospital systems—to show that it is possible to offer this treatment to underserved patients. Being underinsured or uninsured should never be a barrier to ECMO.” 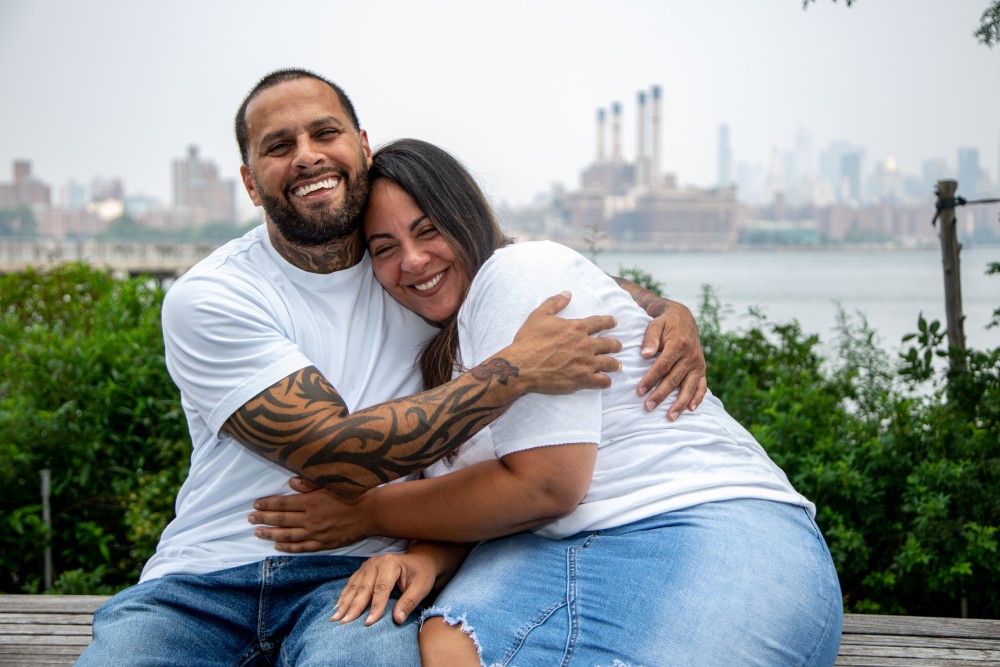 After Virola regained consciousness, he slowly improved and soon began rehab at Bellevue to get back on his feet and regain his motor functions. On June 9, after nearly three months in the hospital, he was finally discharged to cheers and celebration from Bellevue staff in the hospital lobby. “All I heard was clapping and yelling,” he said, “My favorite Marc Anthony song—Flor Pálida—in the background.”

When she finally saw his eyes open, Jasmine said softly, “We got you, baby.”

As part of his recovery, Virola got back into his workout routine at McCarren Park in his home neighborhood of Williamsburg. He takes brief jogs along the track and completes dips on the park exercise equipment to rebuild strength in his upper body.

“Sometimes I can’t do what I want to do,” he said, “because I don’t have the energy, or my hands don’t function right—I get out of breath quick. But every day I’ll push a little higher.”

In April, Virola was vaccinated for COVID-19. “I do encourage people to get the vaccine,” he said, “because you just never know what this virus can do to your body. Look at me—I was 40 years old, healthy. I had no underlying conditions and it almost took my life.”

Virola is back to spending quiet moments with his wife, sitting along the Williamsburg waterfront and watching sunsets. He enjoys viewing boxing matches and playing basketball with his 14-year-old son, Freddy, Jr. and seeing him grow up.

“I feel blessed and grateful to be here, especially knowing how many lives were lost in this pandemic,” he said, “Things happen from one minute to the next, so we have to live in each moment.”

Get a COVID-19 Vaccination