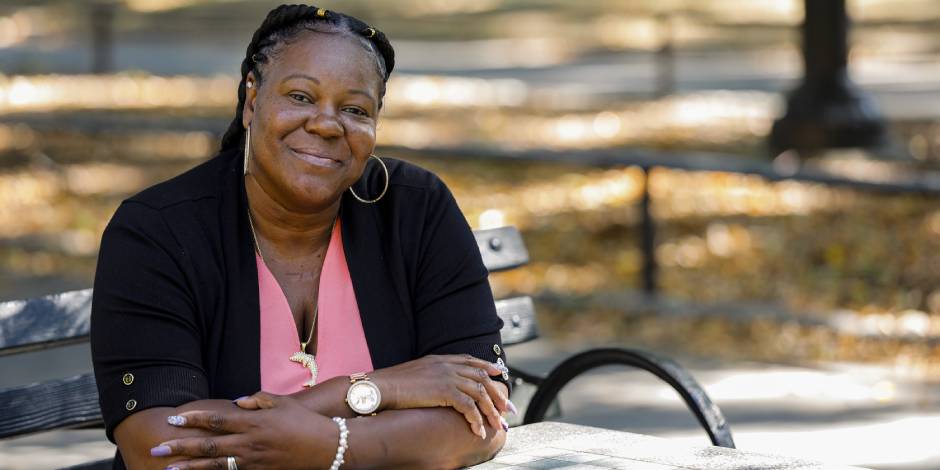 When Teresa Graham pawned her fiance’s necklace for money to drink alcohol and go gambling, he called off their wedding.

“I was devastated,” she said. “I felt like life was falling apart. I couldn’t see the light.”

She prepared for detox at NYC Health + Hospitals/Jacobi to save her relationship and life, but was concerned what the staff would think. This would be her second time in the program.

When she arrived in detox at CATC, she walked the familiar halls of Jacobi and bumped into Wendell Bennett, an addiction counselor who treated her years before.

“I was so ashamed,” she said. But as soon as he saw her, Bennet greeted her with smiles and hugs.

It was a sign that she made the right decision, Graham said. At NYC Health + Hospitals, substance use experts help New Yorkers like Graham beat addiction using a tailored approach to address the roots of addiction. For Graham, that meant working with Jacobi’s care team to confront her history with alcohol that began when she was a child.

Her first drink was at the age of 8, when she snuck into her father’s room and sampled one of the gallons of vodka he would bring home. “I didn’t like the taste, but I remember how it made me feel,” she said. She wanted more, so she drank in secret at her parents’ home, where alcohol was always around. When she moved out, her drinking increased.

For 40 years she drank any time of the day, as her skin became discolored and her eyes reddened. She was rarely sober, even at her job as a boiler mechanic. Despite her addiction, she spent more than 20 years on the job and was even promoted to a supervisory role.

“I used my income to pay the bills and to drink. I was a functioning alcoholic,” she said.

But her employer, concerned for her health and ability to operate machinery, requested she complete a substance abuse program to stay employed. To keep her job, she entered detox at Jacobi. She completed the one-year Substance Use Disorder program in 9 months, Graham said, and it was life changing. She was healthier with alcohol behind her, she thought.

But in 2017, Graham retired and soon succumbed to another addiction. She began taking daily trips to casinos, where she would gamble and drink alcohol under the garish lights and noisy clang of slot machines.

When her fiancé postponed the wedding, she looked at her reflection and saw bloody eyes and fatigue on her face. “I didn’t like what I saw,” she said. “I told myself I got to get out of this.”

That’s when she decided to return to Jacobi for help. She restarted seeing a psychologist on a weekly basis, participating in group activities and meeting with an Alcoholics Anonymous (AA) group for women. All parts of the treatment plan are recommended with a patient in mind, said Dr. Jantra Coll, a psychologist and clinical director at CATC.

“We try our best to meet patients where they’re at,” Dr. Coll said. “There’s no judging or stigma.”

After her successful completion in another round of detox, she asked her fiancé, who had decades of sobriety, if he would still be with her. He said yes.

Now Graham spends her days with her three grandchildren and husband, continuing ongoing therapy and encouraging other people to become and remain sober.

“It’s one thing to get sober, and it’s another to stay sober,” she said. “Recovery feels so good.”