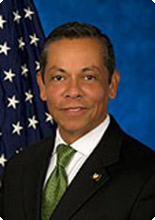 Dr. Perea-Henze is the Deputy Mayor for Health & Human Services for the City of New York. In this capacity, he oversees 13 agencies and mayoral offices with 70,000 employees and $24B budget, serving the needs of the most vulnerable New Yorkers. This portfolio includes the departments of health & mental hygiene, social and homeless services, children, aging and the public hospital system as well as mayoral offices on domestic violence, LGBTQ, data informatics and food policy.

The Honorable Raul Perea-Henze was confirmed by the Senate as the 8th Assistant Secretary for Policy & Planning at the US Department of Veterans Affairs in 2010 and served in this post until 2013. He was the principal advisor to the President and the Secretary on veteran policy and strategy, overseeing unprecedented enterprise transformation and interagency collaborations with DOD, HHS and the White House.

As a corporate executive, government official and global health physician, he developed and led innovative functions at major healthcare organizations, ranging from public-private partnerships in bioterrorism, genomics and global R&D to co-founding a start-up technology firm delivering solutions to help veterans with substance use disorder. He also served directly under all four Secretaries of Commerce in the Clinton Administration, first as a Senior Health Care Advisor and White House Fellow at the White House, and later as Deputy Assistant Secretary and Acting Assistant Secretary for Management and Budget and CFO at the Department of Commerce. Prior to his work in Washington, he was a senior management consultant specializing in global strategy, and a senior official in New York City government.

Currently, he serves as a member of the Advisory Board to the Comptroller General of the United States and he is a Fellow of the World Medical Association and the New York Academy of Medicine. He has also served on numerous boards for global and local organizations in health, mental health, Latino and veteran’s affairs and national service.