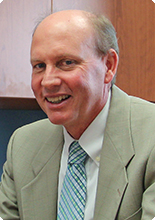 Mr. Ulberg brings 25 years’ experience in New York State government and health care finance to his new role. For the past 10 years, he has served as the chief financial officer for the New York State Medicaid program. He was a principal negotiator and designer for the State’s Medicaid Redesign Team Waiver—the five-year, $8 billion waiver widely recognized as a national model for restructuring the health care delivery system and incentivizing collaboration among provider groups. The waiver also has been groundbreaking in rewarding achievement for predetermined health outcomes, including the reduction of avoidable hospital admissions.

Prior to joining the Department of Health (which oversees the Medicaid program), Mr. Ulberg served under five different governors in the New York State Budget Division, concentrating on a range of budgetary issues. He has overseen fiscal matters related to the operation of the State Office of Mental Health’s network of 22 hospitals and outpatient programs.

Mr. Ulberg earned his bachelor of science degree from Michigan State University and his master’s in public health degree, with a concentration in health and hospital administration, from the University of Michigan.